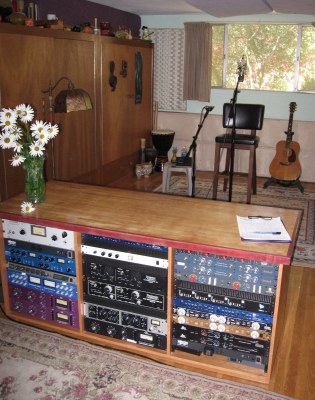 The recording studio at Wildplum Recordings is a music production studio located in Oakland, CA (San Fransisco Bay Area). At Wildplum we recognize that in any recording project, it is the performance that is paramount. Thus our first priority is you, the musician. We offer highly personalized service and a relaxed, intimate, comfortable atmosphere, together with finest in digital and analog equipment (i.e., we record and edit digitally using Pro Tools HD but mix in the analog domain, using our extensive equipment inventory-"out of the box", it just sounds better); all aimed at helping you reach your creative peak.

Here' s what Derek Sivers (the founder of CD Baby) wrote to us after he received Wildplum' s recording of the Palm Wine Boys: "We're REALLY picky about what goes on the front page. We get about 75 new albums a DAY coming in here now, (about 30,000 total), and yours is one of the best I've ever heard."

With over 35 years experience recording a variety of music, both in concert and in the studio, Wildplum can handle most any project; be it classical, folk, folk rock, punk folk, roots, alt. country, blues, pop, or rock. We also do mastering, audio editing and sonic restoration work, as well as voice-overs and narration.

"Perfection. I just listened to your work in my car and it is just exquisite...it flows beautifully and sounds amazing. Thank you my friend for your belief in me as an artist and for your expertise and dedication as an engineer. I could not be happier with the sound and feel of this project, thanks to you...just a great job, Paul." - David Maloney (of the folk duo Reilly and Maloney) 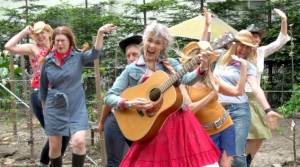 "Older Ladies", Donnalou Stevens' funny, charming, and empowering music video, has surpassed seventeen million views (YEP, 17,000,000) on YouTube and 30 million(!) on Facebook.
It was recorded, mixed, and mastered by Paul Tumolo at Wildplum Studio. Check it out.

Philosophy:
Wildplum is not your typical commercial studio. There is only one engineer here, me (Paul Tumolo), and I produce or co-produce about half of the projects I record. In a very real sense, artists record here because of me. Whatever the layout, gear, or recording media, a studio is only as good as the recordist behind the board.

Recording is an art form based on science. It can't be done paint-by-numbers or by formula. Sure you have to have a good grounding in the technical things, but you absolutely must be in touch with the soul of the music. Music is about conveying emotion. A great recording is one that moves people. To me, a successful project is one which accomplishes three things. It maintains artistic integrity, it fulfills the artist's vision, and people responded to it emotionally. I am not here to put my imprint on your music. I'm here to assist you to realize your vision on record; to help you make the record you want to make.